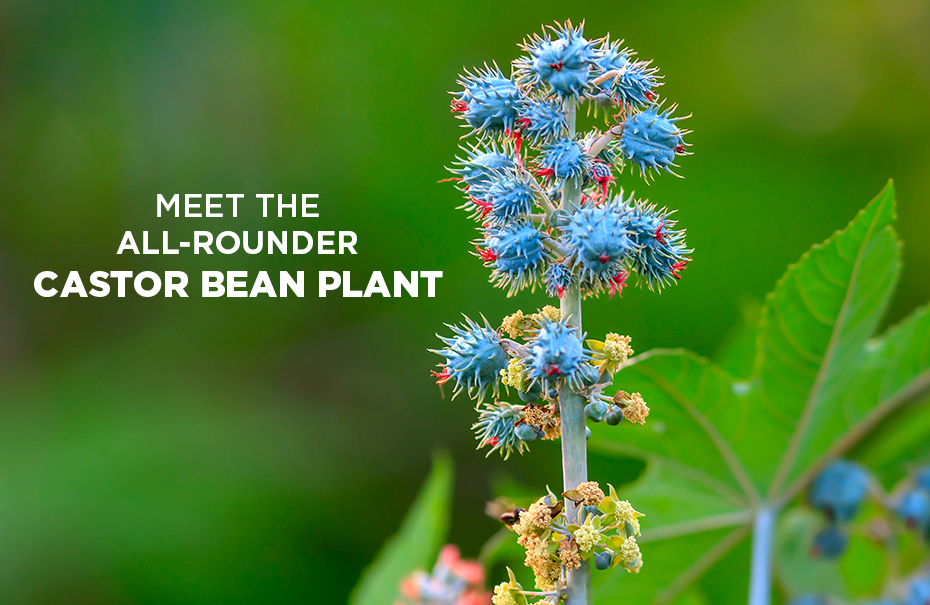 Would you love to grow a gorgeous, showy plant in your backyard or home garden whose seeds are poisonous? Of course not, right? But, what if we say that its benefits and beauty are so breathtaking that it nullifies its toxicity? Then maybe yes? Well, that mysterious plant we are talking about is none other than – Castor Bean Plant.

We all plant for a purpose. It may be either to beautify our home or garden with pretty flowery plants like jasmine, rose, dahlia, etc., or for medicinal use like holy basil, mint, ginger, etc., or some simply for their bushier and flowing nature like money plant, broken heart, etc. Of course, there are various multipurpose plants that are not only ornamental but also have medicinal and economic value, but castor bean is one such plant that is everything – beneficial, deadly, gorgeous, and whatnot? Sounds interesting? Let’s know more about it.

Decoding Castor Bean
One of the oldest plants known by various names – Ricinus Communis, African Wonder Tree, Castor Bean, Castor Oil Plant, Mole Bean Plant, castor bean is as old as 7000 B.C. or so, the evidence of which were even found in the tombs of Egypt where its oil was used to light lamps and for medicinal purpose. Usually grown in Asian, African, and American Continents, they originally are natives of the Ethiopian region of Africa.

Castor bean is a fast-growing shrub that can reach the size of a small tree, around 40 ft., and is a fruit-bearing plant. Its shiny red fruits are one of the prized possessions of the plant, as inside the fruits lie the most appreciated beans of all time, the castor seed. Castor seeds resemble an enlarged dog tick with intricate designs and beautiful patterns, and the interesting fact is that no two seeds have a similar pattern.

Although a sun-loving plant, castor beans can even thrive in mild, frost-free winters for many years. Hence, it won’t be wrong if someone says that the castor bean plant is one of the most versatile and useful plants ever grown or cultivated on this planet. Don’t believe us? Keep reading.

The Commercial Crop
The castor bean plant has got pretty good aesthetics. It is quite popular among farmers all over the globe not just due to its attractive appearance and from head to toe but also because of its commercial value.

Some of the flowers of the plants develop into red/burgundy spiky fruit, whereas other flowers are green and yellowish with almost cream-colored stamens. While, its elongated star-shaped green leaves enhance the serenity of the surroundings even more that also vary in terms of appearances like maroon, purplish-bronze, reddish-purple, purplish-black, or dark metallic. And lastly, its smooth red/purplish stem adds more charm to it. In short, everything about castor bean plants is bold and beautiful but more than that, it is its commercial possibility that never fails to grab the attention of farmers. In 2020, the global Castor Oil market was valued at 1180 million USD and now growing at a CAGR of 2.8%, it is expected to reach 1470 million USD by the end of 2025.

Now, here comes the twist. As we said before that castor beans are deadly gorgeous, we actually meant it. The term ‘deadly’ is not a metaphor because the beans of the castor plant are extremely poisonous. Due to the presence of Ricin, a toxic protein, the raw seeds of the castor bean plant are not considered safe anywhere near children or pets because the large, colorful, attractive, bean-like seeds can be very tempting for both and hence is a farmer’s plant.
Even as few as four raw castor seeds, when ingested, can result in symptoms of poisoning, nausea, vomiting, abdominal pain, bloody diarrhea, weakness, colic, depression, loss of appetite, trembling, sweating, loss of coordination, difficulty breathing, sweating, progressive central nervous system depression and fever, convulsions, coma, fatal allergic reaction and even death in certain individuals. Still, the castor bean plant is preferred by passionate farmers because the beauty and the benefits of the plant overshadow its toxicity without a doubt.

Recommended: The Success Story of Gujarat in Castor Bean Production

Source of Income
Castor bean is a source of income or a business venture for many due to its long list of usefulness. There is a huge demand for castor bean and castor oil around the globe, for its use in various types of industries, due to its unique characteristics that are not easily found in its counterparts such as coconut oil, peanut oil, or any other vegetable oil.

On average, worldwide consumption of castor oil increased at a rate of 7.32 thousand tons per year. In fact, the current rate of castor oil production is not considered sufficient to meet the anticipated increase in demand. That’s how significant this plant is.

Also, due to its high annual seed production and yield, and its ability to grow on marginal land in semiarid climates, the castor bean plant has turned out to be the most promising edible and non-edible oil crop today. So, let’s see the use of castor beans/seeds in various industries.

Chemical Industry
About half the weight of the beautiful-looking bean of the castor plant is thick, yellowish, or almost colorless oil, which is the infamous and one of the most revered oils by human civilization – Castor oil.

When it comes to industrial use of castor oil, one of its noteworthy characteristics is the low pour point, i.e. its ability to be in a liquid state even at low temperatures. Along with this property, the high content of Ricinoleic Acid in castor oil makes it a very useful product in the specialty chemical industry, where it is used extensively in the application of paints, varnishes, furniture polishes due to its vicious and smooth texture.

Beauty & Cosmetics Industry
Owing to the high Vitamin E content and its ability to retain moisture, castor bean oil is widely used in skin and hair care products and has found its way into the ingredients list in cosmetic products such as makeup products, creams, lotions, and cleansers.

Health Care – Pharmaceuticals
Castor oil is known for its medicinal properties for thousands of years and hence is a vital ingredient in the healthcare industry. As a pharmaceutical-grade inactive ingredient, castor oil emulsifies and solubilizes other water-insoluble substances, and the hydrogenated castor oil obtained after adding natural hydrogen to it is used as an extended-release agent, stiffening agent, tablet, and capsule lubricant. Castor oil is also used as a stimulant laxative to relieve occasional constipation and is considered as a drug delivery vehicle for very non-popular drugs such as anticancer drugs.

Agro-Industry
The production of castor oil generates two main byproducts: husks and meal of castor beans. Due to high nitrogen and phosphorus content, the blends of castor meal and castor husks are used as fertilizers and have proved to be effective in aiding substantial and healthy growth of various plants.

Moreover, castor seed meal has been observed to be useful against termites and harmful pests. Hence, it can be very useful as an additive that acts as both fertilizer and natural pest repellent in vegetation. It is worthwhile to note that castor seed meal is also a source of Calcium, Magnesium, Sulphur, Zinc, Iron, and Copper for plants and hence has become very useful for soil amendment and to soften the hard soil.

Automotive & Others
Castor oil has proved to be of great use in producing greases and lubricants in the automotive industry. Further, research is on its way, for the production of biodiesel from castor oil which hopefully progresses in the coming future.

It is also used for applications in the plastics and resins industry and acts as a common agent for emulsification. Other than that, castor bean oil is also used in manufacturing lamps, wax, and soaps to some extent.

As enlisted above, the castor beans have found its way in various industries and it is still advancing. India is a net exporter of castor oil, accounting for over 90% of castor oil exports, while the United States, European Union, and China are the major importers, accounting for 84% of imported castor oil.

Therapeutic Uses
The therapeutic benefits of the castor bean plant are derived from its oil. Though the castor bean itself is highly poisonous, the toxic protein, ricin, is not fat or lipid-soluble, hence the oil extracted out of the bean is considered safe for human consumption.

Therapeutic benefits and uses of castor oil are wide in range and a few of them are as mentioned below.

Conclusion
The Castor bean plant is nature’s gift to mankind. From the beans to the leaves and the leftover castor meal and husk, everything adds value to the medium or product to which it is added. Also, now with the advancement of technology, we humans have been able to draw the benefits out of this versatile plant and the castor oil derivatives thus obtained are contributing to the economy, way greater than we imagined.

Above all, it is imperative to note that castor oil products are purely natural, and none of their use causes harm or damage to the soil, water, or environment in any manner. Hence, we can say that the castor bean plant is an all-rounder, and thanks to prominent castor oil manufacturers like Ambuja Solvex, who are helping people get the most benefits out of it.