The fundamentals of Ricinoleic Acid The charm of ricinoleic acid lies in the benefits it provides. Ricinoleic acid is one of the castor oil derivatives used in many products by various industries. It is an unsaturated omega-9 fatty acid and a hydroxy acid, a major component derived from the castor seeds. Castor oil is also described as ricinoleic acid triglyceride which has the availability of hydroxy functionality of fatty acid for up to 70-90%.

Ricinoleic acid has three functional groups which define its versatility and its importance in producing castor oil-based products. For example, carboxylic group. This group can be led to produce esterification products. The single point of unsaturation can be modified by hydrogenation, epoxidation and vulcanization. The carboxylic group transforms castor oil through reactions like esterification and amidation. The existence of a double bond transforms the castor oil through hydrogenation, carbonylation and epoxidation. The hydrogenation process transforms the liquid ricinoleic acid into a semi-solid saturated state. The semi-solid saturated ricinoleic acid is useful in resin or polymer mixtures because the oil has a high melting capacity, good storage quality, taste and odour.

The functional group hydroxyl can be acetylated, alkoxylated or removed by dehydration to increase unsaturation of the castor oil at carbon-12. Catalytic dehydration forms a new double bond in the link of ricinoleic acid which results in a conjugated acid. This type of change helps in rapid drying, excellent colour retention, flexibility and water retention for coatings.

Ricinoleic acid is derived from castor oil through the process of hydrolysis. For industrial use, mostly it is produced by saponification or fractional distillation of hydrolyzed castor oil. 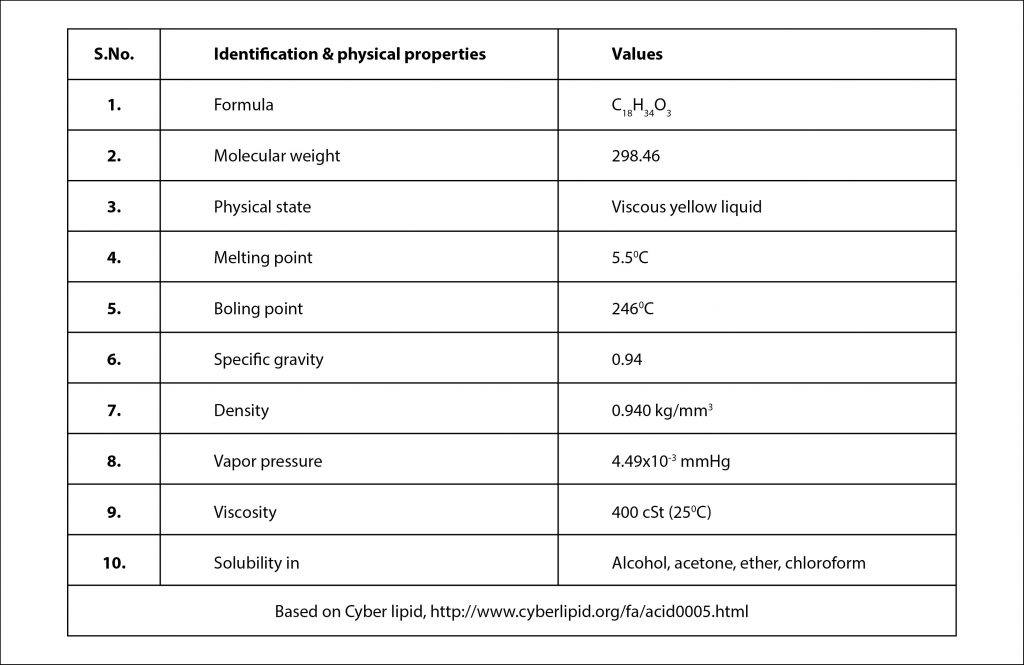 As a hydroxy fatty acid, ricinoleic oil is used in oleochemical industries. These chemicals are similar to petrochemical commodities and can be used for various chemical applications. Castor oil is an important bio-based raw material for industrial applications. It is deemed as a suitable renewable resource for chemical reactions, modifications and transformations. Ricinoleic acid, an important castor oil derivative, is used in pigments, printing ink and textile finishing. It is also added in turkey red oil, dry-cleaning products and detergent formulations. Its different kinds of derivatives are like ricinoleyl alcohol, methyl ricinoleate, azelaic acid, and ricinenic acid are used as plasticizer and emulsifier. 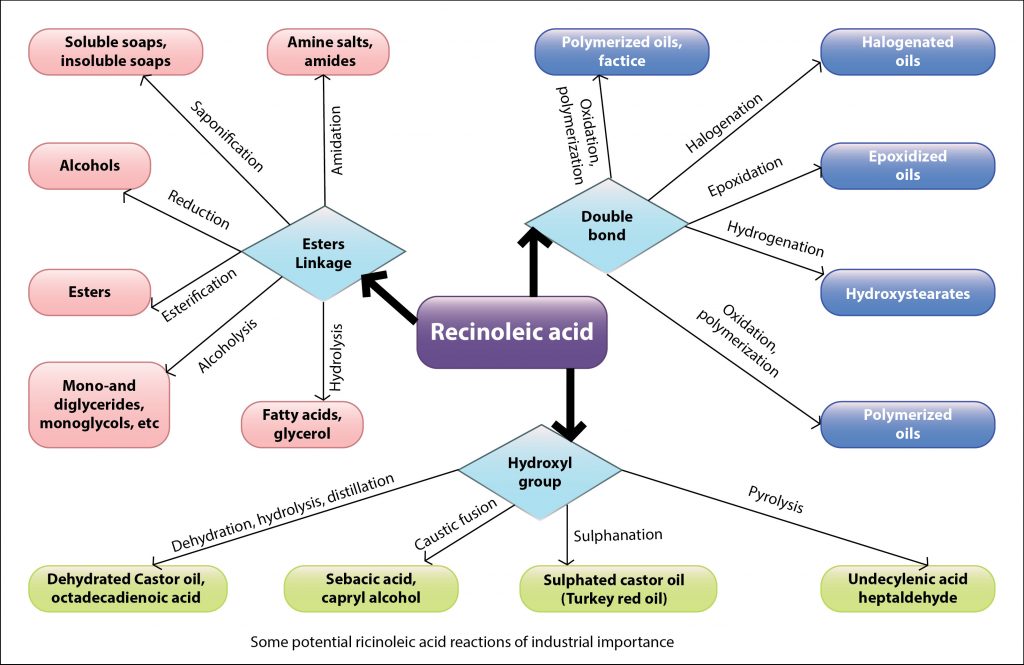 Hydrogenation – Hydrogenated castor oil is best for lubricant industries because of its ability of water resistance and preservation of its lubricity. It is used in cosmetics, lubricants, paints, waxes, polishes, carbon paper, candles, crayons, etc.

Pyrolysis – This process helps in producing biodiesel and other renewable bio-based produce to use in chemical and fuel applications.

Hydrolysis – The alcohol agents produced after the hydrolysis of ricinoleic acid is used in plasticizer, dehydrator, as a solvent, anti-bubbling agent and floatation agent.

Ozonolysis – 9-carbon fatty acids derived after the ozonolysis of castor oil can be used in preparing polyurethanes, polyethers and polyesters.

Castor oil is the only commercially available natural oil that is produced from plant-source and that’s why it is considered safe for many applications including medical applications. The anti-inflammatory and anti-microbial properties of ricinoleic acid from castor oil can help in treating irritated skin and that’s why it is used in cosmetics and personal care products like lipsticks, skincare products, perfumes, bath soaps and also pharmaceutical products. Castor oil products are environmentally friendly because it eliminates the use of toxic chemicals that harm the environment and residents of the environment.

As a household remedy, castor oil with its benefits is used in treating skin infections, constipation, to get relief from arthritis and muscle pain and as skin and hair conditioners. It is still used for oiling grains in many households to protect against humid weather and insects. Ricinoleic acid proves to be the most important ingredient for many industries around the world. What makes castor oil derivatives as important ingredient for mak... How to use Jamaican Black Castor Oil?