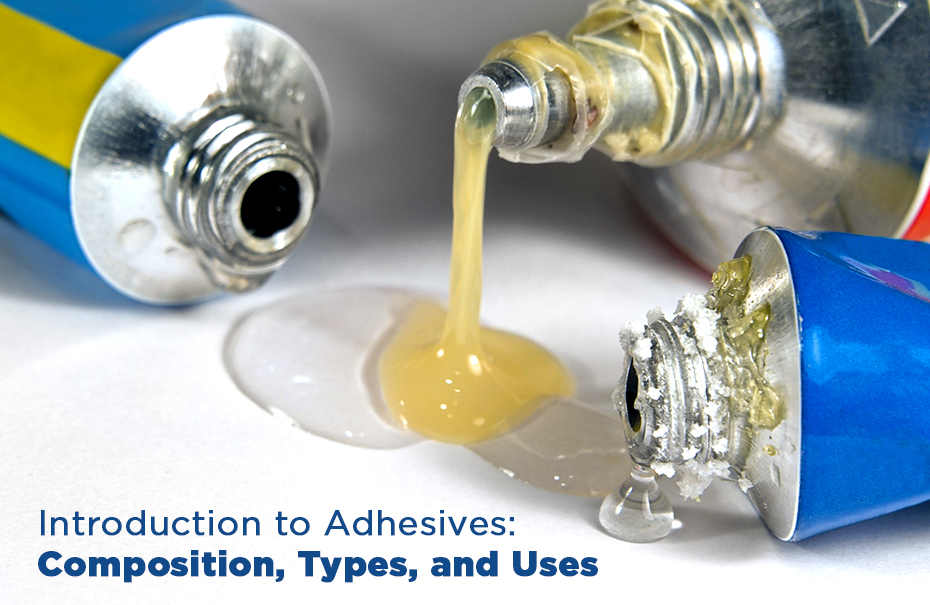 The adhesive had only one meaning and use for all of us in our childhood, and that was in our art and craft classes, where we knowingly squeezed the gum out of the tube onto our palms and waited to peel it off later. Nostalgia hitting right in the heart, isn’t it? Well, now we know that the sticky substance that made up our childhood is much more than just gluing papers together, that it is which holds our cloth, shoes, furniture, cars, construction, and other countless things together.

Adhesives and Their Roles in Our Daily Life
Adhesives are nothing but stuff that helps us stick things together. It is a substance that forms a bond between two different things, resisting their separation. Also known as glue, cement, mucilage, or paste, as they come in various forms from solid, liquid to semi-liquid, adhesives are capable to stick things either temporarily or permanently upon surfaces depending on their adhering ability.

Taking about their role in our daily life then, adhesives come to the rescue when we break our only pair of glasses, need to sort out the last-moment footwear disaster, have to prevent water leakage from damaged drainage, get creative, and are into arts, crafts, construction, decorations, and the list goes on. So now you know, from being a simple stationery item to it being used in packaging, automotive, and every other industry, adhesives have multiple purposes in their life.

History & The Composition of Adhesives
Natural, unprocessed glue found in trees was the first form of adhesive discovered and used by humans. Approximately 200,000 years ago, Neanderthals performed dry distillation of birch bark trees and produced tar out of them that was sticky and water-resistant in nature. There began the revolution of adhesive application. From binding stone tools to wooden handles, adhesives began to be used even as a sealant and in medicine.

Different historic shreds of proof set up its existence and utilization in more than a few civilizations around the world. In King Tutankhamun’s tomb, artwork depicting wooden gluing operations and a casket made of wood and glue have been found. The historical Egyptians additionally developed starch-based pastes which have been determined to be used in the bonding of Papyrus to apparel and plaster of Paris-like cloth made of calcined gypsum.

Next, came the Greeks and Romans who contributed to the improvement of adhesives, as they found quite a number of animal and fish-based adhesives, egg-based pastes, and made use of different herbal components such as blood, bone, hide, milk, cheese, vegetables, grains, tar, and beeswax for adhesive applications.

However, it was once solely in 1690 the first business use of adhesive was installed by the Netherlands where they produced glues from animal hides. Following them, the manufacture of casein glues began in German and Swiss factories as well. In 1830, natural rubber became the first material to be used as adhesives which opened the doors to modern-day adhesives.

Later, due to the First and Second World Wars, many innovations and advancements happened in the composition of adhesives which improved its development with the use of newly developed materials that exhibited various properties. Thus, a variety of new synthetic adhesives emerged with changing needs and ever-evolving technology.

So, an adhesive is made from not just a chemical mix of polymer or resins; there is a long list of substances like the animal product, copper, graphite, milk, oil, starch, rubber, nickel, water, silver, vegetables, and others that can be found in it.

Now, let us check out the types of adhesives and their uses.

Types of Adhesives
Adhesives are classified into various types based on a variety of factors such as their chemistries (e.g. epoxies, polyurethanes, polyimides), their form (e.g. paste, liquid, film, pellets, tape), their type (e.g. hot melt, reactive hot melt, thermosetting, pressure-sensitive, contact, etc.), their origin (e.g. natural, synthetic), or their load carrying capability (structural, semi-structural, or non-structural). Hence, their uses-cases too vary from each other. Let’s know more about each type below:

Epoxy Adhesive – A polymer-based adhesive, epoxies are broadly used as traditional reactive adhesives for a variety of functions in general industry, construction, electronics assembly, automobile production to the aerospace market. They are primarily composed of epoxy resin and curing agents. Epoxy adhesive is available in the market in both – one-component packages and two-component packages depending on the curing agent used, and the curing technique applied. Epoxy adhesives are highly stable as they are made to withstand a constant weight or force over an extended time and hence, show sensible adhesion on various substrates and were found to bond metals, glass, concrete, ceramics, wood, and plenty of plastics well and good.

Polyamides – Polyamide adhesives are utilized in varied forms – alone, as liquid resins with quite a number of viscosities, in solid form (powders, sticks, films, and fabrics), or as solutions or emulsions in organic solvents or water. They have good adhesion to metals, plastics, ceramics, wood, leather, and fabrics and are majorly used in the manufacture of machines and instruments. The hot-melt polyamide adhesives are best suitable in the production of packaging materials, as well as in printing. Their adhesive bonds are resistant to mechanical loads, including peeling as well as to the impact of the action of fuels, oils, and mold.

Paste & Liquid – Made with high viscosity, paste adhesives are extremely thick in nature making them difficult to spread during the curing period and hence are best suited in gap-filling. While the liquid adhesive is one of the most commonly found adhesives that is easy to spread and apply but there are chances of leakage or sagging during the curing process and often take longer to cure.

Film & Pellets – Offered in rolls or pre-cut lengths or shapes and in thicknesses between 2 and 8 mm for distinctive applications, adhesive films are easy to apply and bond well with the fabric, leather, rubber, aluminum, etc. Whereas hot-melt glue pellets are used by inserting them into a hot melt gun and melted upon surfaces that require rapid melting adhesive. They are also waterproof, have better temperature tolerance, have higher movement capacities, and prevents corrosion on the metals.

Pressure-sensitive – Pressure-sensitive adhesives or PSAs, also known as self-adhesive/self-stick adhesives are the non-reactive adhesives that merely form an attachment when pressure is applied to bond the adhesive with a surface. No solvent, water, or heat is required to activate Pressure Sensitive adhesives. They are incredibly versatile and hence have a large industrial and commercial usage commonly found in everything from food labels and packaging to bandages and electronics. They adhere well to paper, glass, wood, plastic, or metal, just by applying light pressure.

PSAs can be either permanent or removable. Like the safety labels for power equipment, sound/vibration damping film, foil tape for HVAC ductwork, etc., are some of its permanent applications while, protection films, price marking labels, masking tapes, bookmark and note papers, barcode labels, promotional graphics materials, wound care dressings, EKG electrodes, athletic tape, analgesic, and transdermal drug patches, etc., are its removable example where they can be removed after several months or years without leaving any residue on the adherend.

Contact Adhesives – Unlike other adhesives, contact adhesives are required to be applied on both surfaces and allowed some time to dry before the two surfaces are bonded together. As long as 24 hours might be required for contact adhesive to dry but once set, the bond forms very quickly. Their application includes laminates, in the formation of a bond between Formica and wooden counter, and in footwear as in attaching outsoles to uppers, in the assembly of automotive parts, furniture, leather goods, and decorative laminates as well as plastics.

Semi-Structural – They are adhesives that are strong but cannot maintain their load-bearing support continuously or for long periods without deformation or failure and hence are suitable for short-term or temporary attachments.

Synthetic – Made by combining different chemicals, synthetic adhesives excel in versatility and performance compared to natural adhesives. They can be modified in many ways and are often combined to obtain the best and specific properties required for ease of application and durability in their intended application. They are based on elastomers (natural rubber, butyl rubber, butadiene rubber, styrene-butadiene rubber, nitrile rubber, silicone, and neoprene), thermoplastics (nitrocellulose, polyvinyl acetate, vinyl acetate-ethylene copolymer, polyethylene, polypropylene, polyamides, polyesters, acrylics, and cyanoacrylate), and thermosets (phenol-formaldehyde, urea-formaldehyde, unsaturated polyesters, epoxies, and polyurethanes)

Natural – Sourced from animal (e.g. the milk protein casein and hide-based animal glues) or plant origin (vegetable starch (dextrin), natural resins), natural adhesive are also referred to as bioadhesive or eco adhesive because they are based on renewable materials that are non-toxic and require no special disposal procedures. E.g. the simple paste that you make by mixing cooking flour with water to bond something like in a pie, or spring rolls, etc., while cooking is natural adhesive.

Although they are said to have less adherence compared to synthetic adhesives, they still have their place in wood and paper products, particularly in corrugated boards, envelopes, bottle labels, cartons, book bindings, foils, furniture, and laminated film, etc.

That being said, Polyurethane adhesive based on castor oil is here, and they are turning out to be a significant alternative for synthetic adhesive.

Polyurethane adhesives – also called PU, are among the most used adhesives due to their extremely strong adhesion, isolation, and flexibility. They are best known for the elasticity of seams and bonds they create. They are the key component in the construction, woodworking, shoe production, and textile lamination industries.

The preparation of polymers from vegetable oils is currently receiving increasing attention because of economic and environmental concerns. Raw materials based on vegetable oils have several excellent properties for producing valuable polymers such as polyurethane, alkyd, polyester, amide, and epoxy resins.

Vegetable oils are triglycerides of fatty acids, and they can be used as starting materials for polyurethane synthesis only when they functionalize and form polyols. Castor oil was found to be a promising starting raw material for PU as it possesses low toxicity and availability as a renewable agricultural resource.

The major constituent in the castor oil is ricinoleic acid, which is a hydroxyl-containing fatty acid, and it was found possible to modify the unsaturated fatty acid and introduce hydroxyl functional groups into castor oil by using enzymes or chemicals, thereby converting castor oils into polyol. Since castor oil was hardly used for cooking purposes and it contained hydroxyl groups in rich numbers, castor oil was perfect to be used directly as a polyol in chemical industries.

Polyurethane resin has been used as adhesive, specifically in woodworking however current research on castor oil confirmed that adhesives prepared from aromatic isocyanate in castor oil have good adhesion strength and chemical resistance other than solvents and formaldehyde already used in a variety of adhesives. However, these low-molecular-weight organic compounds are volatile and are major air pollutants, especially in indoor environments. Moreover, a previous study indicated solventless castor oil polyurethane adhesive joints showed peeling strength values 75% higher than a solvent-based commercial adhesive. Thus, castor oil-based PU resin was declared fit to be known are bioadhesive.

The major benefits of this polyurethane derived from castor oil are that they are easy to handle even at ambient temperature, have strong resistance to water and ultraviolet rays, have high mechanical strength, and the fact that it is derived from a renewable source.

Adhesives have a long history of use, and there’s a type of adhesive for every need. So, it is important to have a proper understanding of each and its uses before picking up any random one. We introduced you to a few adhesives while they are still a lot many varieties which you would be surprised to learn about. We at Ambuja Solvents, stick to natural resources, and hence our adhesive made from refined castor oil is something you must consider for your next project. So, to know more about us, visit us today.